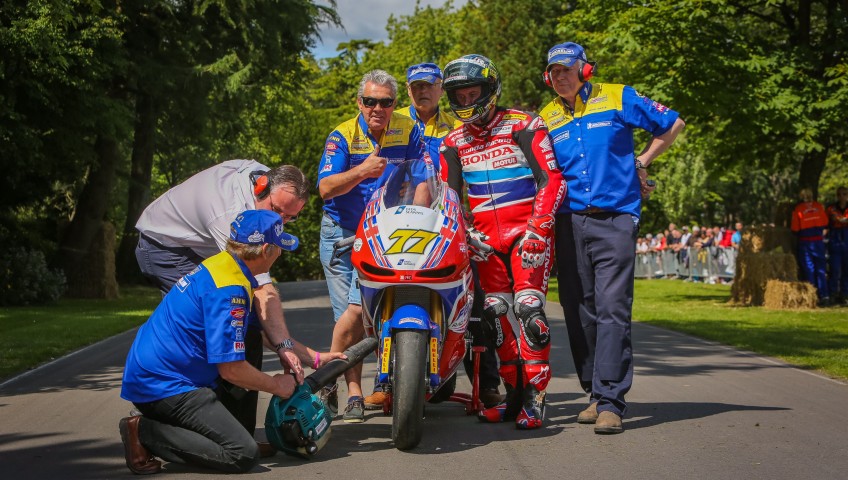 For over two decades, Phil Morris Racing has been dedicated to preserving Motorbike Racing history. Fans, riders and sponsors, who for many years have turned this sport into a worldwide revolution, can now share in the amazing efforts Phil has made. From Classic races such as the Manx GP, through to the modern Aprillia MotoGP bikes, he and his team, have restored the bikes to their former glory. In addition, Phil has successfully reunited the riders who put them through their paces, putting them back into the saddle.

I met Phil Morris at an event and it soon became clear just how passionately mad about motorbikes he really was. He may not be a name that you recognise, but he is widely respected within the racing fraternity. He invited us to meet him at his museum so he could show us his work, his collection of bikes and memorabilia. I was fascinated and willing accepted his kind offer, not knowing what to expect.

Phil beamed with pride as he met us in the car park. As we stepped inside, the place blew my mind; I was like a child in a sweet shop, my eyes were everywhere, in awe of what was unfolding. You can only visit by appointment as it’s such a personal labour of love, reflecting his unwavering passion for two wheels, but Phil humbly gave us a guided and informative tour.

He started riding at the age of 12yrs after stripping down an old Bantam to use for Trials and Motocross. Although he competed throughout his teens, he had enough insight to realise that wasn’t his forte and concentrated on what he was exceptionally good at, working on the bench. Phil showed us his workshop where he restores machines without compromise. He is a perfectionist and will only allow others to contribute that will follow his exacting standards. He proudly showed us his latest project, where he was converting a wet clutch to a dry clutch, by bastardising parts from different manufactures. I guess he did it because he can.

When he decided to build his workshop / museum, Phil’s wife gave him her blessing as long as he followed two rules; he could have no running water and no toilet in the building. With a smile he said, “Then I’ve got to go home.” I can imagine how easy it would be for him to occupy every spare moment restoring bikes, but the call of nature wins every time.

After walking passed his collection of racing bikes, he led us upstairs to his Santa’s grotto of memorabilia. Wow, if Carlsberg could make a Motor Bike Collection, it would probably still fall short of this bounty. He has a collection of over 300 crash helmets donated by the top riders, such as Peter Hickman, John McGuinness, Valentino Rossi, Wiliiam and his father Robert Dunlop, to name a few. He has Trophies donated at top events, such as the TT and his entrance doors are covered with the signatures of all the top riders from around the world that have visited. Rob Barber the legendary TT rider visits regularly and describes it affectionately as, “His Church.” This wasn’t a display of wealth or ego. Phil Morris is a genuinely lovely, down to earth guy that wants to preserve and share what makes the sport so special. He said, “Motorbike racing becomes part of your DNA and there’s no cure.” He has worked hard all of his career and wants to give something back; the sport is bigger than one man, but he can be the pied piper who can create a following with boundless enthusiasm.

Phil has for over thirty years been involved with motor racing sponsorship and event management for the top meetings and has clearly become a major influencer in the sport. He is the guy you may not know behind the names that you do. Phil said that riders have to be special people to excel at their level, but Phil is also a special person igniting a passion behind their success.

Part of his motivation is to encourage and bring along the next generation of Motorbike Racers, sponsoring them to learn the skills and become our homegrown talent of the future. He loves the buzz throughout the sport. “It’s all about the people and the characters behind it that makes it special”, he said, reminiscing on the highs and lows of his career. Phil has been instrumental in keeping alive the sporting achievements from the past, for the great people that created them and as homage to the fallen.

He loves to showcase his work at venues big and small, wherever like minded people can appreciate and discuss these legacy bikes; not for him, but for them. His work is selfless and inspiring, much to the respect of the present racing legends that regularly visit him on his stand.

I have chatted to many people about motorbikes, yet meeting Phil was by far the most interesting and pleasurable experience I’ve had. Phil Morris, I salute you sir. You’re an amazing man with an amazing mission.

Wot's the difference with the two engines ✊✊

Wot's the difference with the two engines
✊✊

Check out how Marc Márquez claimed pole at the #ArgentinaGP! #MotoGP