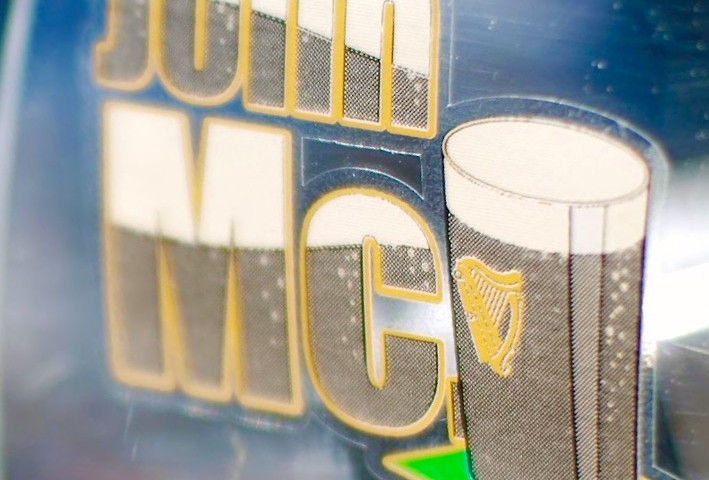 John McGuinness (born John Warren McGuinness, 16 April 1972 in Morecambe) is an English professional motorcycle racer who competes for the Honda Europe factory racing team in road races like the Isle of Man TT, the North West 200, the Macau Grand Prix and on the short tracks he rides for the Padgett’s Honda Racing Team in the British Superstock and Supersport series. He was part of a motorcycle endurance-racing team called Honda TT Legends.

McGuinness is a specialist Isle of Man TT solo motorcycle rider with 23 wins as of 2015. In 2013, a left-hand bend on the Snaefell Mountain Course used for TT races before the top of Barregarrow on the main A3 road was named McGuinness’s in recognition of his wins, together with Dave Molyneux who was similarly honoured. In April 2016, the RAC announced McGuinness as recipient of the Segrave Trophy for 2015.

Born and raised in Morecambe, Lancashire, he has two children, Ewan and Maisie.

His father owned a motorcycle repair shop, but advised John to train as a bricklayer. Graduating in 1990, the resultant recession forced him into cockle fishing with his future father-in-law.

McGuiness’s first race was an endurance road race at Aintree in 1990, at age 18.
Isle of Man TT

John first competed on the Isle of Man in 1996 and took his first win in the Lightweight 250cc race three years later, the year he also became British 250 Champion.

TT 2006 proved to be the best ever for McGuinness. He won three races (Senior, Superbike and Supersport) and he lowered the outright lap record four times during the festival. This all started in the TT Superbike race on 3 June, recording 17:42.53 from a standing start, then 17:41.71 on the second lap. His record lap stood at 127.933 mph to take in the 37.73 miles of the Mountain course, before another record-breaking performance in the Senior TT race on 9 June. John set a time of 17:39.95 from a standing start (already 1.76 seconds faster than a racing lap) and then blitzed the course in 17:29.26, 10.69 seconds faster than his opening lap and at an average speed of 129.451 mph.

McGuinness at the start of the 2007 Senior TT; the race in which he became the first rider to lap the Snaefell Mountain Course at over 130 miles per hour in race conditions.

TT 2007 was also a great year with McGuinness taking wins in the Superbike TT and the Senior TT with lap and race records in both, the Senior lap record of 17:21.99 averaging 130.354 mph not only the outright lap record but the first to break the 130 mph barrier.

The 2008 Isle of Man TT saw McGuinness struggle with reliability problems with his bikes, but did manage to pick up his 14th career win on the island, in the Senior TT. This win moves him alongside Mike Hailwood as the joint second-placed rider with most wins.

McGuinness surpassed Hailwood’s mark during the rain-delayed opening race of the 2009 Isle of Man TT on 8 June 2009. After Cameron Donald unofficially lapped the course at over 131 mph during practice, McGuinness broke the outright lap record by 0.7 seconds, taking the lap record to 17:21.29 or 130.442 mph. McGuinness held off team-mate Steve Plater by 18.11 seconds to record victory number fifteen. That was his only win and podium of the week; however, he did finish the week with a new outright lap record, and the fastest lap ever recorded with a 17:12.30 or 131.578 mph lap on the second lap of the Senior TT. A broken chain cost him a runaway victory, as Plater took his second career TT win.

He has also finished on the podium at the Macau Grand Prix.

McGuinness also contested the British Superstock championship, taking victory at Croft after his team-mate Steve Brogan and champion Alastair Seeley tangled in the final corner. This was his first short-circuit race win since 2001 in the British Supersport series, which he finished in third place overall.

McGuinness during practice for the 2010 Isle of Man TT.

McGuinness was confirmed as part of the HM Plant Honda team for the North West 200 and Isle of Man TT events, also he is confirmed with Padgetts Motorcycles (Padgetts Grand Prix). Entered in the British superstock championship alongside new team mate’s Glen Richards and Ian Hutchinson (road racing events).

At the 2010 North West 200 meeting, McGuinness took his fifth win around the 8.9-mile circuit when he took victory in the Superbike race and he followed this up with third in the feature race behind Alastair Seeley and Stuart Easton. He also took fifth and sixth in the two Supersport races and ninth in the Superstock.

John McGuinness secured his 16th TT success by winning the six-lap Superbike TT in perfect conditions. The Honda rider from England came home 56 seconds ahead of runner-up Cameron Donald, with Gary Johnson third. Keith Amor, Ballymoney’s Michael Dunlop and Dan Stewart completed the top six leaderboard in the TT opener. New Zealander Bruce Anstey led for part of the race but retired on lap three after setting the fastest lap of the race at 131.05 mph. At the end of lap one McGuinness led by 0.5 seconds from Anstey, with Johnson third and Guy Martin fourth. Anstey assumed the lead after the second circuit, thanks to his lap at over 131 mph, with Martin up to third and Johnson fourth. A quick pitstop by McGuinness saw him move into the lead again and then Anstey retired his Padgetts Honda at Quarry Bends. Morecambe-man McGuinness led Martin by 19 seconds after lap three and lap four.

John McGuinness was again representing the Honda spear-head at the 2012 TT. During the practice week, times were close between the various favoured entrants, but McGuinness topped the practice leader board in the Superbike class.

Initially lying second behind Cameron Donald by 2/10ths of a second at the end of the opening lap in the Superbike race, McGuinness brought all his experience to bear over the second lap to lead the race by 2.16 seconds following the pit stop at the end of lap two.[8] By the end of the third lap, the lead had increased to 6.30 seconds. McGuinness continued his commanding performance throughout the remainder of the race, to clinch victory by 14.86 seconds by the end of the six laps.

John was congratulated on his Superbike triumph by his close friend, Mark Webber.

The Superstock TT had been until 2012, one of the few classes which had eluded McGuinness. However, aboard the Padgett’s – HRC Honda Fireblade, McGuinness rode what was widely regarded as an imperious performance to clinch his initial win in the class, and to raise his overall tally to 19 wins.

In 2013, McGuinness won the 6-lap Senior TT, the final race of the event. It was his sixth victory in the Senior TT, one short of the record of seven victories held by Mike Hailwood. He also set the outright one lap record for the Mountain Course, 131.671 mph, in the final lap of the Superbike race in which he finished third during a week dominated by Ulsterman Michael Dunlop’s four wins, reminiscent of Ian Hutchinson’s five wins of 2010.
TT Zero

2012 also saw McGuinness make his debut in the TT Zero class. The involvement of McGuinness, together with that of Mugen was seen as a clear indication of the rising profile of a class of racing still in its infancy.

2014, a battered McGuinness who suffered a motocross accident weeks before the start of the Road Racing season, injuring his right wrist badly, and also suffered liver and other minor injuries. John struggled at his first international road racing meeting of the year the North West 200 and also posted disappointing results at the 2014 Isle of Man TT. On 4 June, John and Padgetts Racing announced he had withdrawn from the second Supersport race, but still raced the TT Zero class, and won it with an enormous lap record, 117.366 MP/H, beating the current Sidecar lap record, and came only 1.8 seconds shy to the current Lightweight 650cc Supertwin one lap record.
MotoGP

John entered 4 rounds of the MotoGP World Championship. One on a 250cc and the other three on a 500cc. These were between 1997 and 2000 with a best result of 12th.
Personal life

John lives with wife Becky with their two children. Currently living in Morecambe he was given the Freedom of the Town in 2007.